Have you noticed your engagement on instagram reducing, follower count deteriorating or photos not showing up in hashtags?  If the answer is yes, then you most probably are a victim of the Instagram shadow ban which so many users have been affected by recently, including me.

A shadow ban makes your instagram account invisible and hides your posts from people who don’t follow you, which can be harmful to growing your account and getting more followers, If you get shadow banned, no matter what or how many hashtags you use in your posts, only you and your current followers will see your post when they search for the hashtags you used. This essentially defeats the whole purpose of using hashtags to grow your instagram audience.

I instantly knew i was affected by the shadow ban as my likes become excessively low and my follower count was just stuck at the same number and honestly, it was so stressful and demotivating. I knew there had to be a way to fix it though so i did tons of research and after a couple of tense weeks, my instagram finally got back to normal. Today, I will be sharing with you guys some tips on how to prevent  being shadowbanned and ways i lifted my ban.

Many times, a completely innocent hashtag can become bombarded with inappropriate content, one of them which is very commonly used by us beauty bloggers being #beautyblogger which thankfully my fellow blogger The Girl In The Green Scarf told me about, after which i stopped using it. Even if you use a single banned hashtag in your post, Instagram will disallow your post from appearing on any of the hashtags you used! There are many hashtags that are broken so the best thing to do is to check each hashtag before using them. If you are shadowbanned, you will have to check all your previous pictures for any broken hashtags and remove them immediately (which is what i had to do and so many of my older pictures had broken hashtags in them which was the reason it took so long for the ban to be lifted) otherwise the ban will not be lifted. 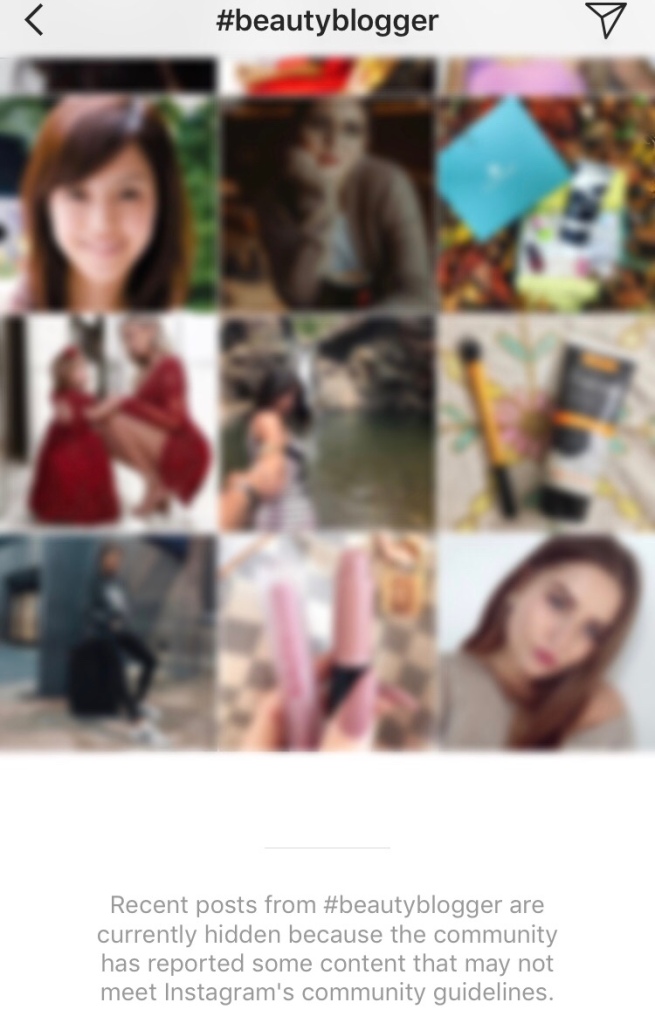 If you’re regularly using the same hashtags for long periods of time, Instagram might consider you’re being a little spammy and hence may shadow ban you, so try to switching up your hashtags for every picture you post, maybe try some new hashtags. This is one of the things I did to lift  my ban.

You need to abide by Instagram’s daily and hourly limits, This means the quantity of photos you like, the quantity of comments you leave and the amount of people you follow or unfollow. In most cases, you shouldn’t exceed 150 likes, 600 comments, and 60 follows/unfollows per hour.

Many articles have advised to take 2-3 days off of instagram as many users have reported that after they stopped using Instagram for over 3 days, their ban was lifted after that. It almost seems like a “reset button” for your account. This is one of the ways i used to get my instagram back.

This is something which i can not say for sure is very effective but is definitely worth a try. If your account is shadowbanned, just go to your profile, and click “report a problem” and write a message to them saying  your posts aren’t being categorized in the hashtags you used. Do not write that you have been shadow banned or that you engagement is low as that is not their concern!

And that’s all guys, i really hope this post was helpful to any of you have been or are being affected by Instagram’s shadow ban or for those of who didn’t even know what shadow banning was, i hope you can take something useful out of this post and prevent that from happening to your account as i know how stressful it can be!

Have been affected but the shadow ban? If so, how did you fix it? Let me know in the comments!

Thank you for reading! xx

61 thoughts on “Have you been affected by Instagram’s Shadow Ban’?”